recommend
this site to a friend 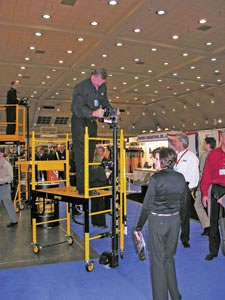 Of all the products introduced at the recent National Hardware Show, The Crawler probably received the most attention as it slowly powered a rolling scaffold around the show floor. It received a PM Editor’s Choice Award not just because it was an attention grabber but because it’s simply ingenious. Read the story.

See the article on the 29th Annual Convention and Trade Show

Builder News reports on the Best New Products of 2005. Read the story.